So I set out this morning in hopes of trying the new Daikokuya in Costa Mesa after seeing edjusted’s post fly through Google Reader yesterday, but just as fast as I could get excited about a new ramen place in OC that excitement came crashing to a halt…hard. It was closed today and according to some workers at Marukai, the grand-opening would be tomorrow. Zannen…

So that was how I reluctantly ended up at Mentatsu (again) to perhaps give their ramen another shot or to send it into ramen oblivion alongside the likes of Mountain, Fuji and Sushi Pia. To my surprise, Mentatsu had a line and a 15-minute wait. Could I be dreaming? I once associated them as being the worst in OC, but would this be their time to step up and impress? With Santouka just being Santouka, Kohryu on the decline, and the new Daikokuya threatening, is Mentatsu no longer scraping the bottom of the OC bowl? Despite my earlier misfortunes, the excitement is back and I’ve never been more gung ho about trying a ramen for the second time! 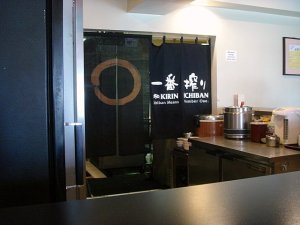 Shoyu ramen: The shoyu ramen was not much better than the first time, but one major difference I did notice was the lack of overpowering pepper, which was definitely a plus. Since my copilot had ordered this (I’m not a fan of adding corn to shoyu ramen), the few bites that I did take made me realize that they’ve indeed improved. I will no longer teeter when friend’s ask me to join them at Mentatsu. 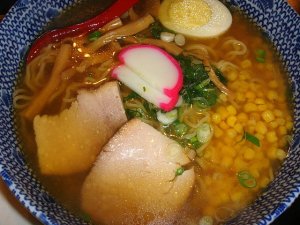 Mabo ramen: Okay, for those of you that don’t know, other than shoyu my favorite type of ramen is mabo ramen. Whenever I go to a ramen-ya for the first time, I’ll try the shoyu ramen. If I go for a second time, I almost certainly order the mabo ramen when it’s on the menu. Mabo tofu is another dish with Chinese origins that consists of tofu, ground pork, and some other ingredients mixed in a spicy sauce. Mabo ramen is just this mabo tofu dish resting on top of a bowl of shoyu ramen. Now that we know what it is, Mentatsu’s mabo ramen would have to be one of THE best I’ve had in socal. Its sauce was very thick just how I like it and it held in the heat like an oven. Even with all the beads of sweat forming on my forehead, I couldn’t take a break to wipe them because it was so good. Mentatsu has been redeemed.

Gyoza: If I remember correctly, Mentatsu’s gyoza was lacking that garlic punch. While today’s gyoza was not quite the knockout, it was still a vast improvement from before.

Negi Ramen: Back in December, an Anonymous reader left a comment (see below) stating how good the Negi Ramen was. So in an attempt to prove them right or wrong, I set out to try this “really reall good” bowl.

So when it finally arrived, I couldn’t believe my eyes…it looked horrific! I mean, it just looked like somebody gave the world’s most angry man a few stalks of green onions, a handful of chashu, and a really sharp knife with everything being chopped and dumped on a bowl of their mediocre shoyu ramen. I wish I could say it tasted better too. Although it didn’t taste as horrific as it looked, there’s really no way it can compete with the best of them. 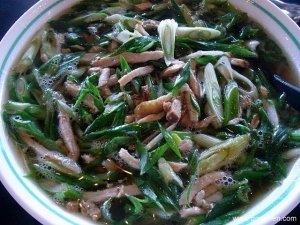 I probably could have made this at home. Foo-Foo Tei’s Negi Daku would blow this ramen away…literally.