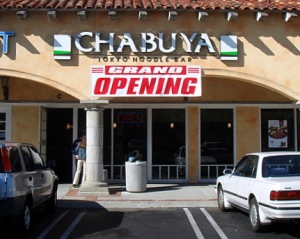 There’s nothing like starting off the new year with the first ramen-ya to open in 2008. Officially open on Tuesday (1/15), Chabuya (with the success of its West LA location) has decided to bring its “real ramen” to the real ramen mecca of LA–Torrance. For those that live in the area, Chabuya Torrance is located where the izakaya Kazamidori used to be. It’s also in the same shopping center as Shin-Mama Ramen but on the opposite side of Home Depot. They’ve been serving people for a couple of weeks now, even though they aren’t officially open, so I thought I’d go give it a try before the crowds start forming. The decor is not as nice as its predecessor, but the wood furnishings and trim greets you with a feeling of old Japan. Chabuya Torrance will be a great addition and perhaps give Shin-Mama some friendly competition. 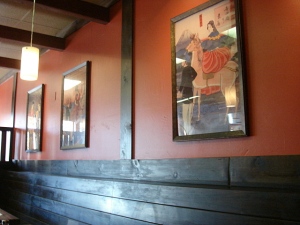 Kara Kara Ramen: This ramen is a spicy version of “The Classic” with ground chicken. I thought I’d try something different since I’d already had “The Classic” numerous times at the Sawtelle location and boy did I make the right decision. The spiciness enhanced everything about the ramen in a way that HGH enhances baseball players. What they need to do is rename this ramen to “The RGH Classic.” I’m not a big fan of the thinner Hakata-style noodles but these are as good as Chef Morizumi intended. The toppings (house-made chashu, menma, negi, fried garlic, and ground chicken) were exceptionally good. I highly recommended this ramen. 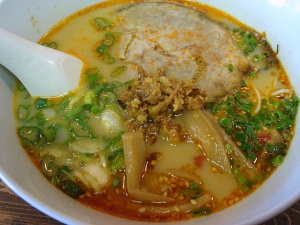 Shrimp Ibushi (Charbroiled Noodles): If you go to a ramen restaurant who’s mission is “to create the perfect bowl of ramen”, why would you not get the ramen?? Anyway, this shio-yakisoba was just okay and only worthy of eating if you’re not in the mood for ramen. I was really hoping for someone to order the okonomiyaki, but I guess we’ll have to try that next time.

Pork Gyoza: If these look a little white to you then that’s exactly what I was thinking. They probably needed to be cooked a little longer, but I’ll just blame it on the new guy in the kitchen. After all, they haven’t even officially opened. 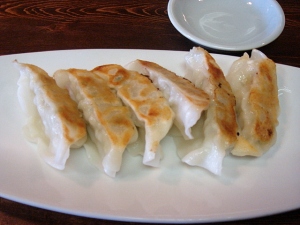 Just a quick note: I’ll be leaving for Tokyo in a few days so be on the lookout for some ferocious ramen slurping. My relatives have their favorites all mapped out for me so let’s hope I can survive the msg poisoning!